Thursday, April 13, 2017
My plans for the day were to delve a bit further into the history of the area by means of the public archives, before seeing some of it more visually in Warwick Castle. Staying in town today meant I had time to enjoy the breakfast offered by the hotel, so after tucking into a big English breakfast I set out. Not much opens before 10 am so I had time to wander over to the northwestern edge of town into Saltisford where the remains of a small leper hospital remains. 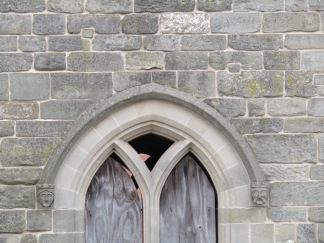 The first St. Michael’s church was established in 1135 by Roger, Earl of Warwick, and there was reference to it being a leper hospital by 1275. By the mid-1500’s it was in ruins, and only 2 buildings remain on site: this chapel from the 1400’s and a half-timbered Master’s house from the 1400-1500’s (covered by a green tarp in the background). Throughout the 1300-1500’s leper houses became less needful in England, and this one ended up as an almshouse in 1545 before being converted into housing over the next few centuries, and was then privately owned. It seems a shame to watch the old buildings fall to disrepair.

After a quick stop into a grocery store along the way for my lunch later, I went on to the Warwickshire County Records Office and went through the process of obtaining a pass to access the archives.  My hopes were to perhaps shed some light on exactly what year my family left England, what might have happened to the land and the family who remained, and if there was anything to indicate why they left England. As I only had a 3 hours, I knew it was a shot in the dark to come up with any amount of information. The records office has a vast array of different types of ancient ledgers, diaries, municipal records, etc., and I had fun just looking through some of the old books. There was a microfilm of the church records – births, deaths, and marriages – from the church my family went to in Hatton parish, but the writing from the late 1500’s was so different from the handwriting today it might as well have been in a different language. Fortunately, there was a hand-written transcription that was much more legible. I didn’t really learn anything new, but I felt a deeper connection to the community.  The rejoicing over births, the sorrow over the deaths that often followed too quickly, and wondering at the stories of the young people who married someone from a neighbouring community – how did they meet? was it a love match? a parent’s choice?  I think I could have spent months on end here and not make a dent in the information and stories I could glean from these records.

I pulled myself away at 1 pm and hurried the few streets over to Warwick Castle, eating my lunch as I walked. As it is Easter holidays, the castle grounds are quite crowded, but not unpleasantly so. 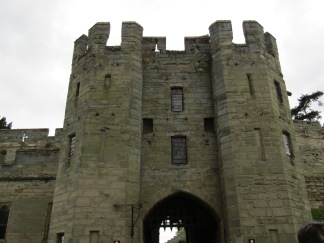 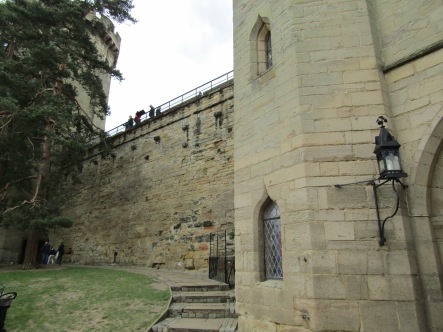 A little history about the castle: this site’s first recorded history comes from 914 AD when Ethelfleda, princess of Mercia (Anglo-Saxon midlands of England), had a burh or fortified area built here to defend their land against the Vikings. There were 10 major fortifications built, strategically placed. Little over a century later after the Norman invasion, King William recognized the value of having a fortification here and had a wooden motte and bailey castle built in 1068. It was replaced by a stone castle between 1154-1173. Several different families owned the castle and the title of earl – either the family did not have a direct male descendant and it passed to a cousin, or a family fell out of favour with the ruling monarch. The upkeep of the castle was expensive and by the 1500’s it had fallen into disrepair. When Queen Elizabeth visited in 1566 and again in 1572, a timber-framed lodging was made for her within the castle as its current buildings were not fit to stay in. In 1604, King James I gave the castle to Sir Fulke Greville and he spent an incredible amount of money restoring it. The family received many well-known visitors over the years, and in 1978 it was sold to a company to be a tourist attraction.

The buildings and grounds were set up to be fun and interesting for all ages, showing what castle life was like at different periods through history.

I then toured some more of the castle grounds while pausing for a show, watching children trying out jousting, and had tea in the peacock gardens: 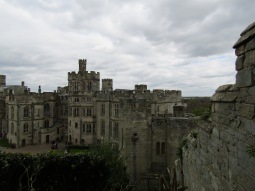 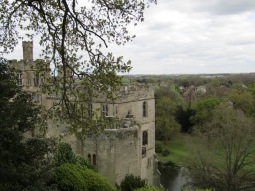 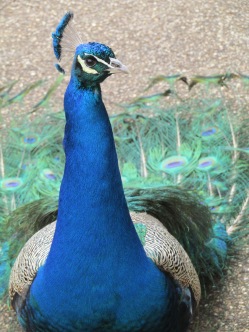 I had reservations that evening at a vegan/vegetarian restaurant in town called Fusca. It is located in the old cellar of a building which gave it an interesting atmosphere. The food was incredible – fresh and full of flavour, and there were some interesting combinations that I would not have thought of mixing. I enjoy different things. Most of menu was vegan so I had a wide selection I could choose from that was dairy-free. If anyone finds themselves in Warwick, I highly recommend going – it is well worth it! 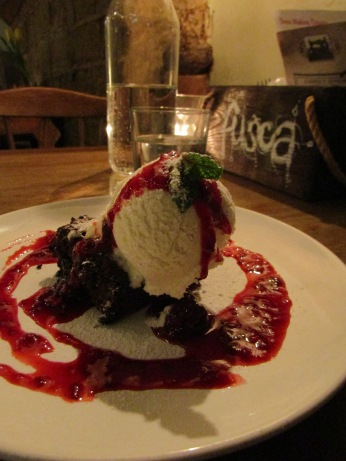 Vietnamese Vegetable Rolls with a blend of flavours of lemongrass, cilantro, mint, and pickled ginger amongst the vegetables. I also ordered a side of pankoras – veggies with Indian-style spices in a chickpea flour batter and fried, served with a coconut yoghurt dipping sauce. I topped it off with a dessert of chocolate, strawberry, and fennel brownie with home-made vanilla ice cream (yes, dairy-free – but it was so creamy and no unnatural flavours, you would swear it was real ice cream). It had a strawberry sauce that went over it as well.  It was all amazing!

After, I went for a little walk as there were a couple more streets in Warwick I wanted to walk through. It was growing dark by the time I walked back to the hotel, but the town felt quite safe compared to many I had been to so far.