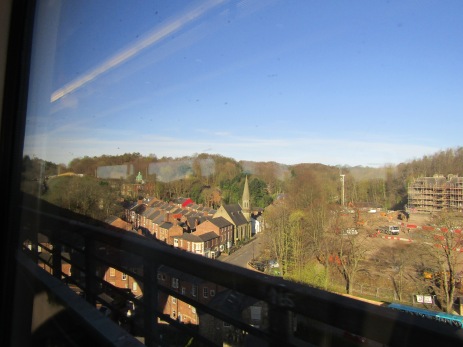 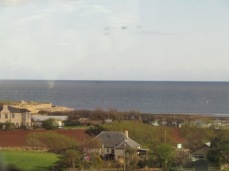 I was practically glued to my train window, not wanting to miss a thing. If there had been some way of being able to see out both sides of the tracks at the same time, I would have. I was in love with the hills, the stone cottages, the dark brooding skies.

I arrived at Edinburgh about 10:30 am and made my way out of the station to find the temperature notably cooler and it was sprinkling. I dug out my spring jacket and umbrella – the first time I have had to use them since I’ve arrived! I started my trek up the hill towards the main thoroughfare of Old Town – the Royal Mile. They weren’t kidding when they said Edinburgh is all hills and stairs!

The rain only lasted about 3 minutes and I was able to put my umbrella away (for the remainder of my trip, come to find out! That must be a record for the UK?) but would need my light coat for the rest of my time in Scotland.

There seemed to be an ancientness that seeped out of every building, every nook. Every stone had a story to tell of a past era. The city has stood, bleak and stoic, through centuries of war, reform, and enlightenment. And yet, through it all, it has continued to stand.

My first destination of the day was Edinburgh Castle – a functioning military base that has stood upon Castle Rock (an inactive volcano) as a fortress since at least the time of David I in the 1100’s. 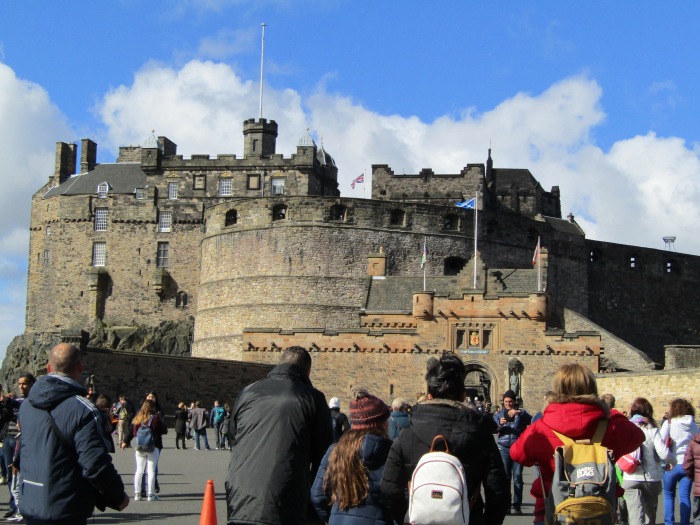 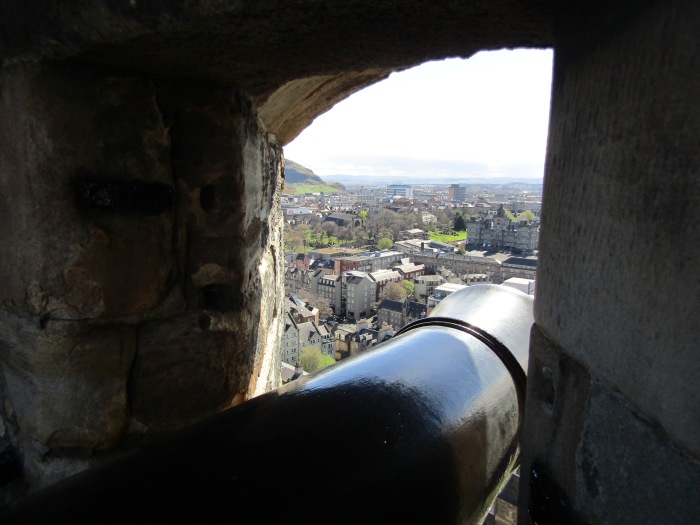 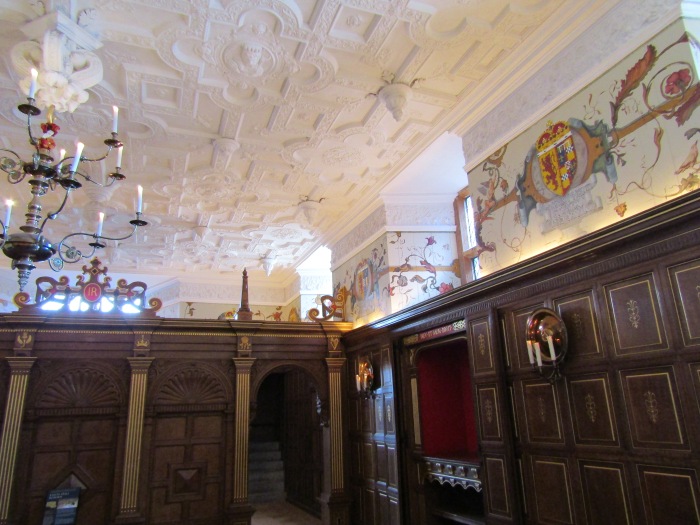 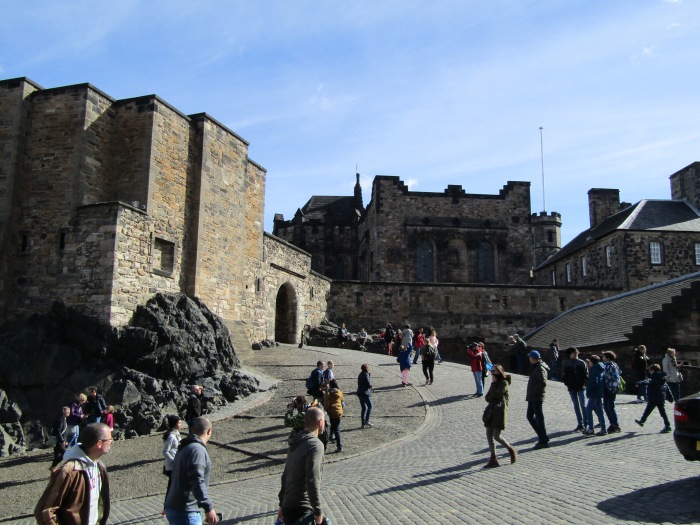 After leaving the Castle, I made my way down through the steps of Castle Wynd to the Grassmarket region which was once a cattle market – now filled with many touristy shops and boutiques. 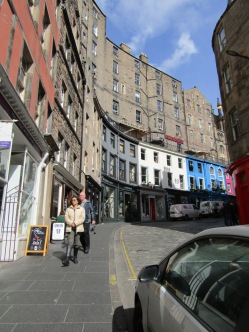 Grassmarket, Some shops off Bow St. (note the upper storey walkway above the coloured shops), a window display of ladies’ wear – oh to have money and space in my backpack…

I stopped at a restaurant called Oink for one of their infamous sandwiches of pulled roasted pork. There is a choice of topping, and sauce to go with it, so I tried the onion and sage stuffing and a chili jam sauce. It was incredibly good! 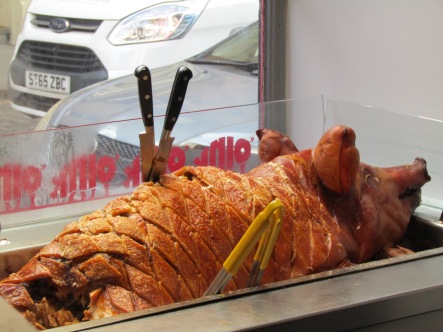 They roast a whole hog every day

Edinburgh was one of the earliest cities to have “skyscrapers” – in the 1600’s as the population grew in the Old City, it remained within the city walls and so they built up. It was common to have buildings 11 storeys tall. The rich would live in the middle storeys, away from the damp and dirt of the smelly streets, but not high enough to climb all the flights of stairs to the top. The poorest lived in the basements and attics with the vermin and filth of the city. (It used to be called “Auld Reekie” for a very good reason – all those people crammed in close quarters before proper hygiene was introduced would have reeked.) There are some areas where alleys and tunnels have been left forgotten hidden under the present-day city as everything built higher, and old buildings replaced new. One of the main streets, George IV Bridge, gives a good example of the illusion this city gives. When you are walking down the street, it seems like an ordinary street with buildings on either side that would enter into at street level. Upon reaching a gap between buildings, instead of finding a courtyard or alley, you realize you are looking down to a road below you and there are several more storeys to the buildings around you below: 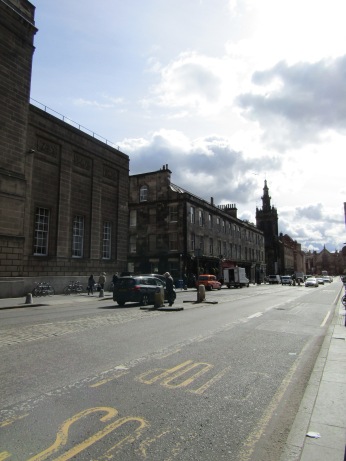 I stopped by Greyfriars Kirk where one John Gray, police officer, was buried in the mid 1800’s. His dog, a Skye Terrier named Bobby, so mourned the loss of his master that he lay on his master’s grave every day to keep vigil for the remaining 14 years of his life. The townspeople would feed him and even made a shelter for him as he would not be moved. Bobby was buried just inside the kirk gate, not too far from his master’s grave. 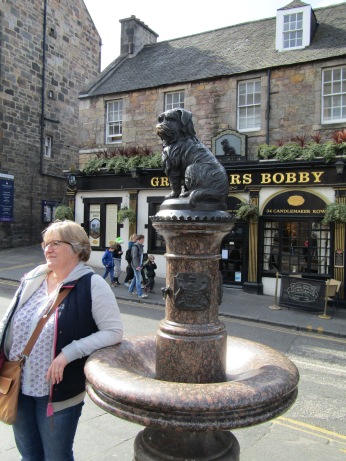 I continued on to the National Museum of Scotland to learn more about the history of the people, where they came from, and the path they have journeyed.

After the museum I made my way down to the John Knox House. The house itself belonged to a family Mosman, but the house has been set up to show the time period and give sight to Knox’s place in history. It is believed he stayed here in the short period leading up to his death, as he was staying close to St. Giles where he was preaching due to his illness and the dangerous times in which he lived. There is an audio guide, and the House was set up to be very informative and interesting to show the trials and difficulties the people went through to bring about reform. 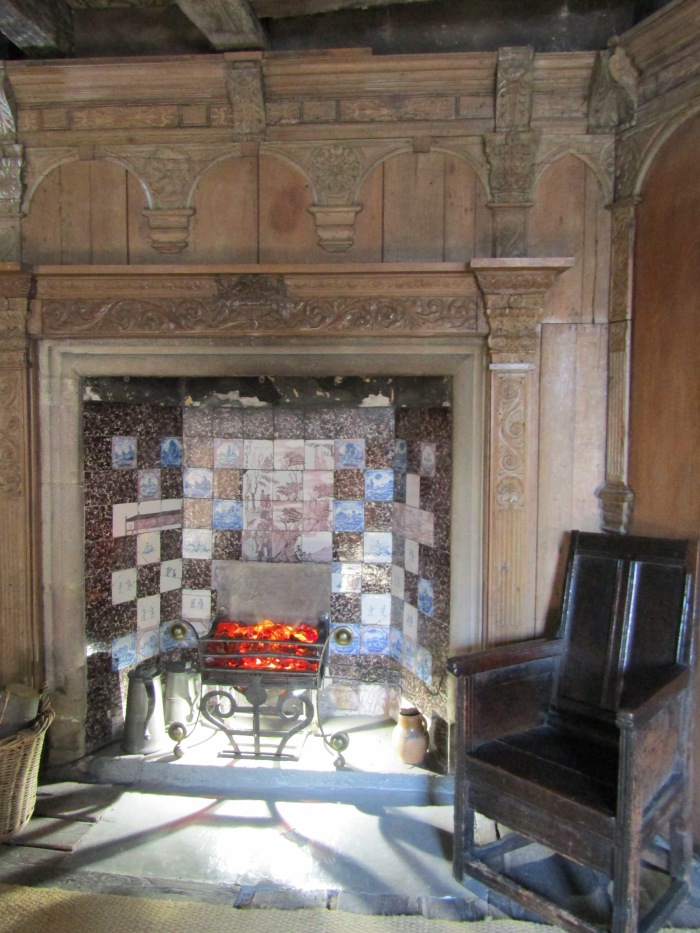 After the John Knox House, I continued walking down the Royal Mile, which is actually composed of several streets, but it is just over a mile on this stretch between the Castle and the Holyrood Palace.

My walk of the Mile complete, I caught the bus to the bed and breakfast I was to stay at that night. By far the most extravagant of the places I stayed in, 23 Mayfield was absolutely lovely and worth every penny. It was filled with lovely old things, had a warmth to it, and yet felt luxurious all at the same time. 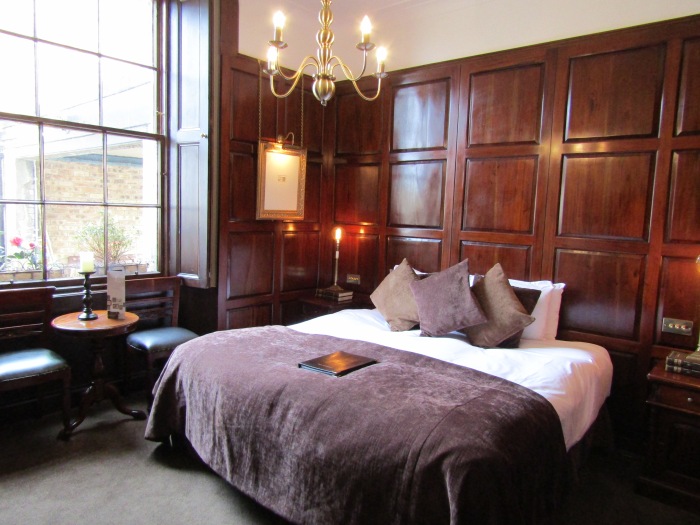 I had a dinner reservations that evening in New Town at The Dogs as I had previously researched where to eat dairy-free and they had options. It was the best meal that I had so far on my trip. I ordered the manager’s special (which happened to be dairy-free): a soup with lentils, celeriac, onion, bacon, kale, mussels, shrimp, and samphire greens, topped with a piece of pan-fried fish and crispy baked kale. The samphire greens absolutely delighted me, as they grow wild in the salt water tidal areas of the Maritimes in Canada, and I assumed they were just another local edible oddity (we have a few of them – fiddleheads, goose tongue greens, dulse). I asked the manager and he said they didn’t grow wild naturally around there, but they are farmed and do grow well. It makes sense, Scotland seems to be quite similar in climate to the Maritimes. Afterward, I walked just up the street and had my dessert at a vegetarian/vegan restaurant called Hendersons. They had a decadent vegan chocolate nut cake with hazelnuts, a truffle-like layer, and a rich ganache, served with a dollop of coconut whipped cream. There was a man playing tunes on a piano so I was able to savour the music along with my coffee and cake.

One thought on “Day 5 – Edinburgh, Scotland”