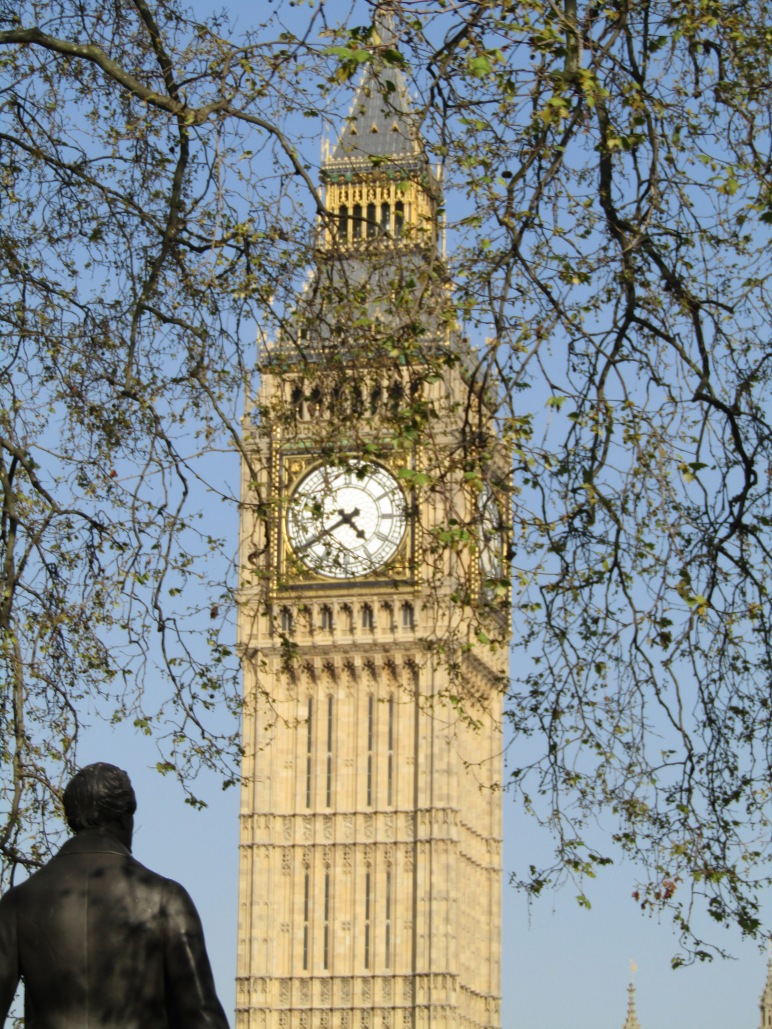 I just returned from a grand adventure that has been 8 years in the making. Sometimes when planning and expecting something for so long, it ends up being a little bit of a let down when the time finally arrives, but I’m so glad to say this was not the case! While the planning was fun, the actual trip was so much more amazing. I think 3 things were the key to its success: 1) being well-prepared and well-informed for the trip, 2) being flexible enough that plans could change – either voluntarily or involuntarily, and 3) having a positive outlook – finding the good that always lies there alongside the bad.

I had really started thinking of taking this journey 14 years ago when researching my family tree. I had discovered the village my father’s family had originated from before emigrating to the new world in the 1600’s, and I already knew from well-documented family history where my mother’s family had come from, and thought it would be amazing  to see these places first hand. About 8 years ago I started thinking seriously about it and saving up for it, a 35th birthday present to myself. There were so many places I wanted to see and experience but the allotted 12 days would not do them all justice. (I don’t think 2 years would do it all justice!) So I poured over my options and adjusted and readjusted to try to cover a few highlights that would mean the most to me, and 2 weeks ago I saw the fruition of my labours come into existence as I flew off into the sunset.

I arrived at the Heathrow airport at 7:30 am local time and made my way through customs without much hassle. I had pre-purchased a visitor’s Oyster card for the underground Tube system, so I was all ready to make my 50 minute journey into the centre of London and start touring. The first part of the journey is over-ground and my first real glimpses of England revealed Spring! The trees were leafed out and there were blossoms everywhere, and green grass. It had been snowing in Canada when I left, and the Maritimes are not known for lovely springs; they consist more of mud and slush followed immediately by summer.

Arriving at Leicester Station at Charing Cross Road, I had a few hiccups with trying to finalize my train tickets for later in my trip (something I wanted to take care of and out of my way immediately upon arrival) but it was all sorted and I wandered my way past some of the landmarks I had read about in and around Trafalgar Square:

I made my way along St. James’s Park to the Churchill War Rooms – the underground bunkers used during World War II.

The War Rooms: I could have spent many hours in there and did not have enough time to do it justice, neither did the crowds allow for proper viewing of everything. It was very interesting to learn about how they used these fortified basements for the war effort, the people required to keep everything running, and what their day-to-day life was like. There was also a whole section that was a museum to Winston Churchill that was a portrait of who he was as a man. 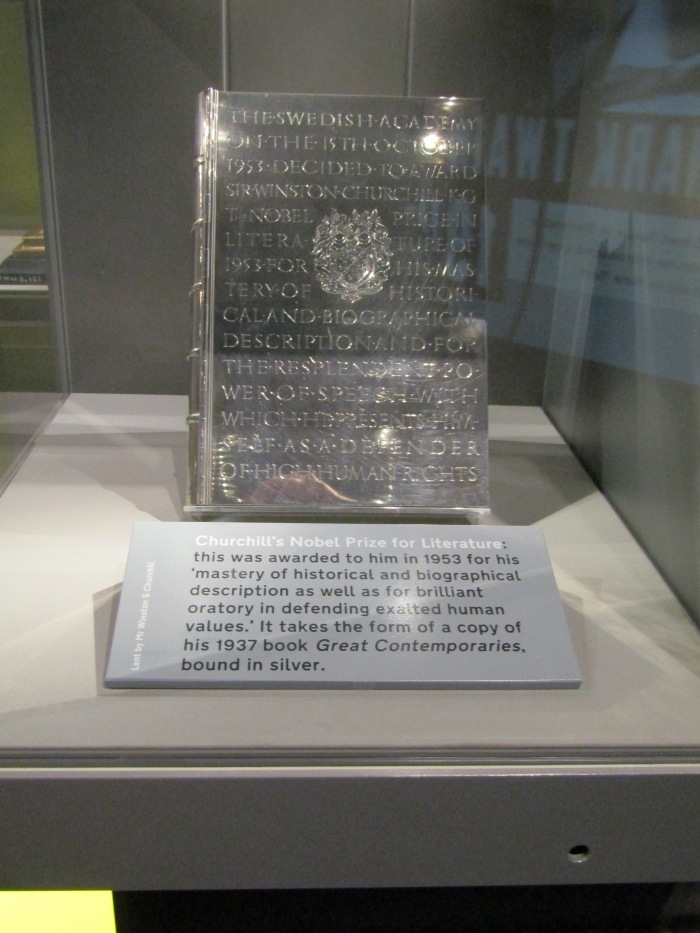 I walked around the corner from there past Parliament Square and caught the Tube to Kensington Gardens and sat on a park bench and soaked in the sun (quite literally too – I received a sunburn) while eating my lunch. These pictures do not do justice of how lovely it all was! 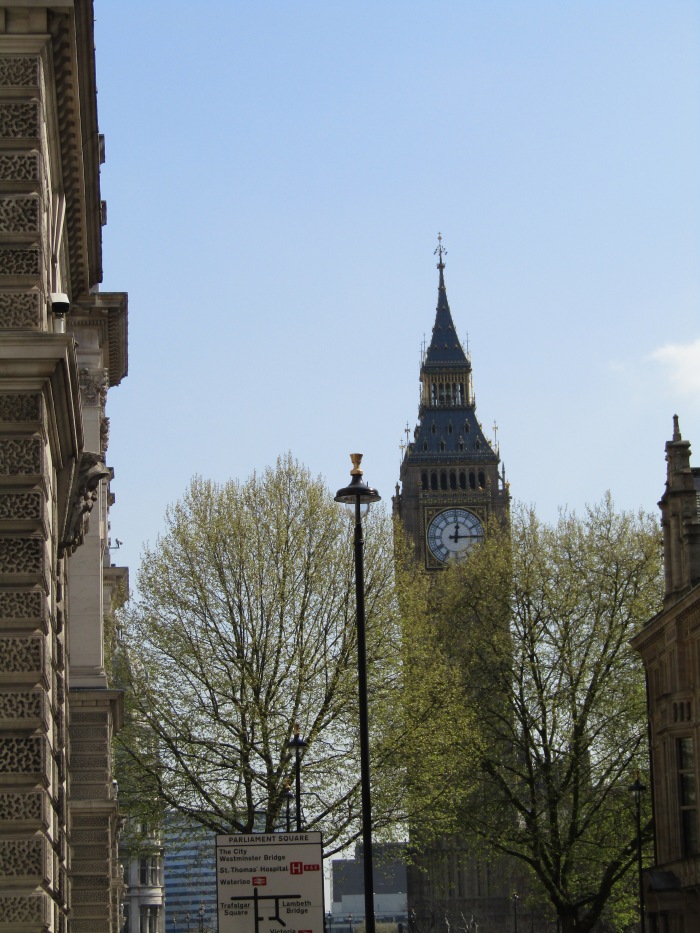 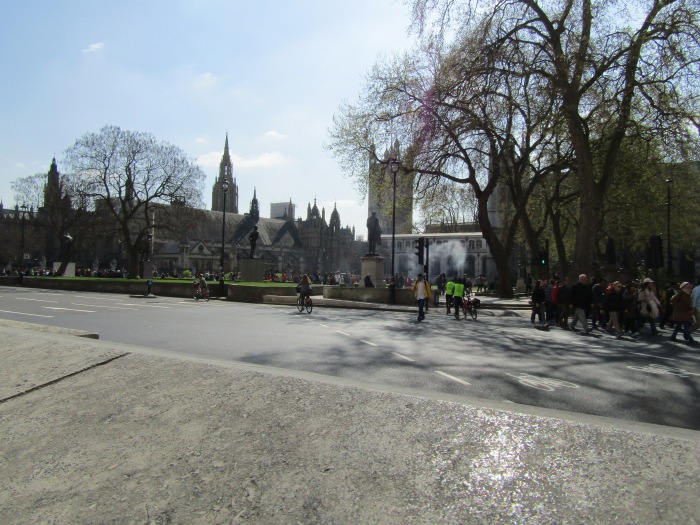 I then went on to tour Kensington Palace: I had purchased the London Pass which gave me quick entry which I was very grateful for! There were a lot of people waiting to get in. I toured through the oldest 2 areas – one from George II and Queen Caroline’s era  which showed palace life in the 1700’s (Handel taught music to their children), and then of William and Mary’s reign in the 1600’s. The grandeur of the palace was amazing. There were painted ceilings, velvet wall paper, ornate furniture. 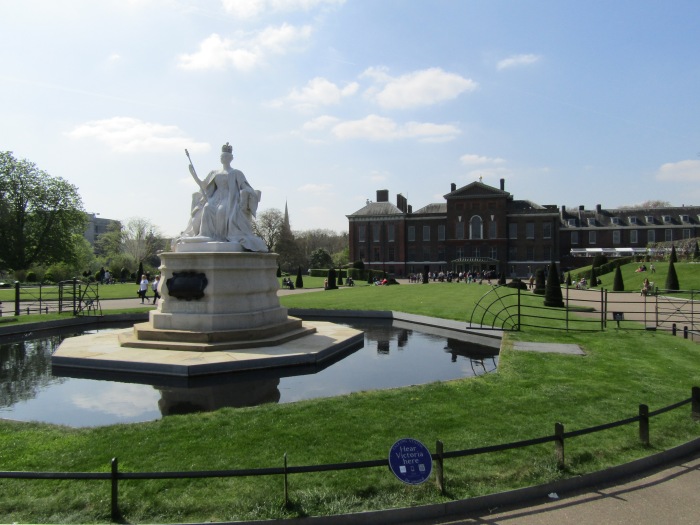 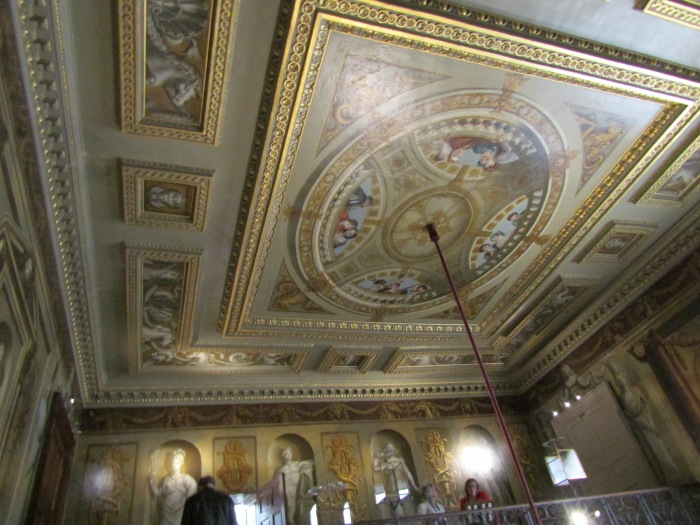 There was more to the palace – a section dedicated to a more modern era and Lady Diana, but there was a long wait for that and I needed to go and check into my room (and unload my backpack that I was carrying with all my belongings). For my first 2 nights, while in London, I had booked a room at Hotel Bluebells in Notting Hill. It was a lovely area, the room was clean and felt safe – my 2 requirements. I was on the 4th floor (3rd floor when in England as the 1st is the ground floor) of a Victorian row house. They are under renovations but I didn’t find that a deterrent.

I then hurried and caught one of the last tours of a hop-on/hop-off bus tours to give me a quick overview of the city. It was a mild evening so I sat on top in the open-air part of the bus and listened to the audio guide give interesting facts of the different buildings and landmarks around me. 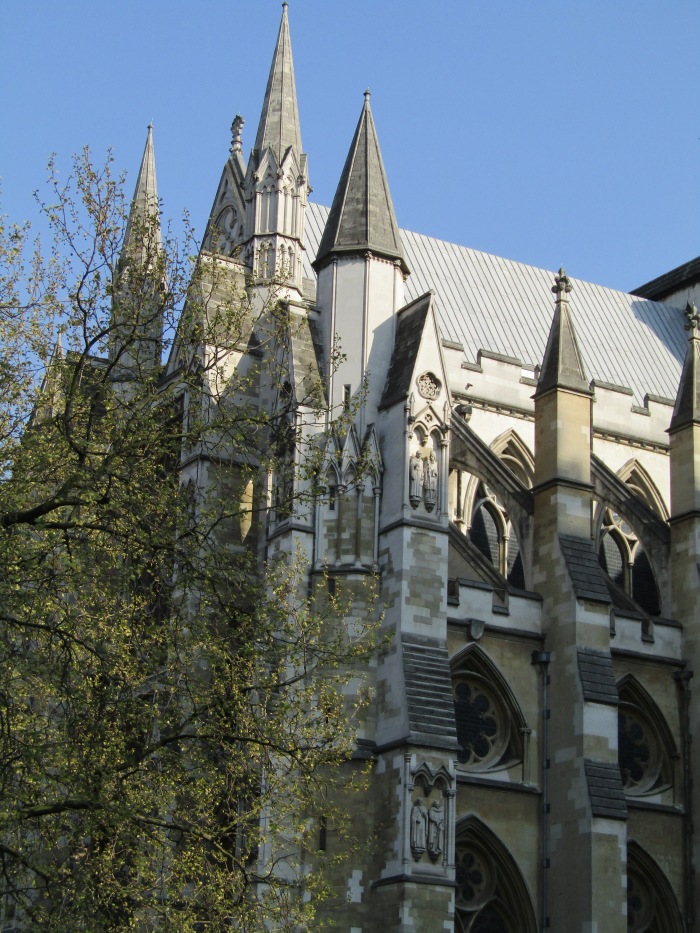 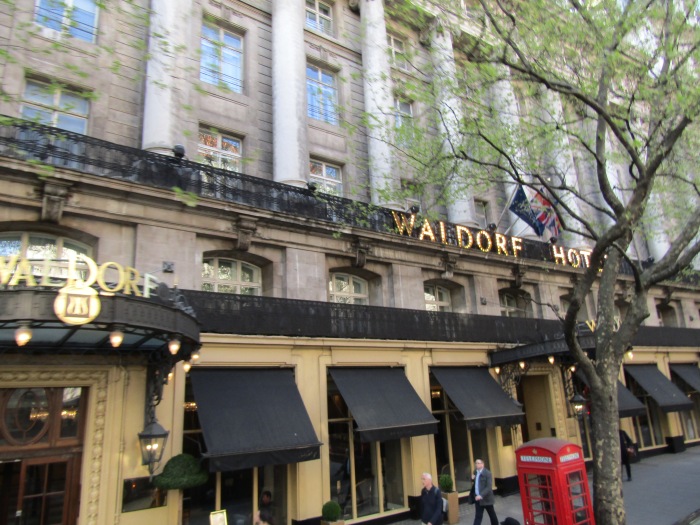 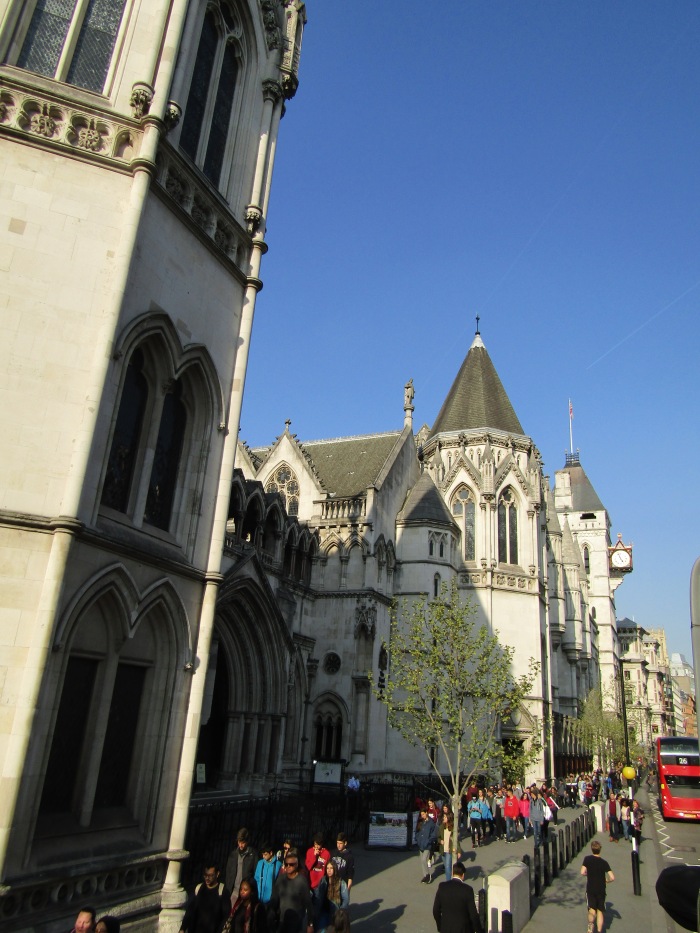 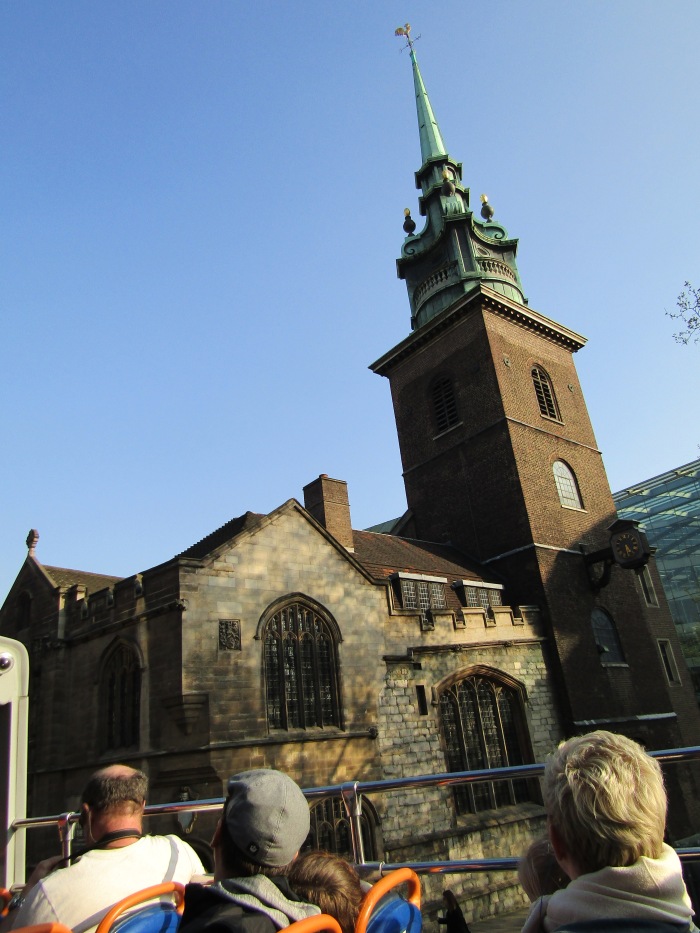 I popped into a grocery store and bought a little meal to enjoy back at my room because at this point I was quite tired (didn’t get the greatest sleep on the flight over), and my mind was overwhelmed with everything I had seen that day.