One of the most difficult things to substitute when living dairy-free is cheese. It is hard to find something that tastes good, melts, and gives you all those feel-good memories from your childhood. I’ve tried a few different brands from the grocery store and most have simply been a waste of money. I’ll eat most anything and hate to throw anything away, but even I was hard-pressed to finish the packages of some of what I have tried over the last few years.

Enter: Chao slices by Field Roast. More specifically the tomato cayenne flavour. It was with great trepidation that I bought these whilst on vacation in the United States; they weren’t cheap. But when I tried it, it was worth the money spent for the treat. Full of flavour, and I’m not talking about a funny chemical or soy taste one, either. It has a little heat from the peppers, but not too much, and the tomato part puts you in remembrance of a nacho flavour. 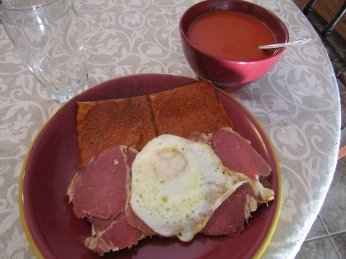 It is perfect for a sandwich: the slices are thick enough that the flavour doesn’t get lost. The texture is not entirely cheese-like, but certainly close enough. It does not stand up to the melt test – it sort of looks like melted plastic. It melts enough that it will slightly hold 2 slices of bread together for a grilled cheese or tortillas for a quesadilla, but I wouldn’t try adding a bunch of other fillings without it falling apart. Don’t expect those long stringy strands like real cheese, either. The taste, in my opinion, makes up for it though and I highly recommend them for vegans and anyone else avoiding dairy.

Chao slices on bread after being under the broiler

I am sorry they don’t sell these anywhere nearby, because I think they are the best cheese substitute I have found so far. 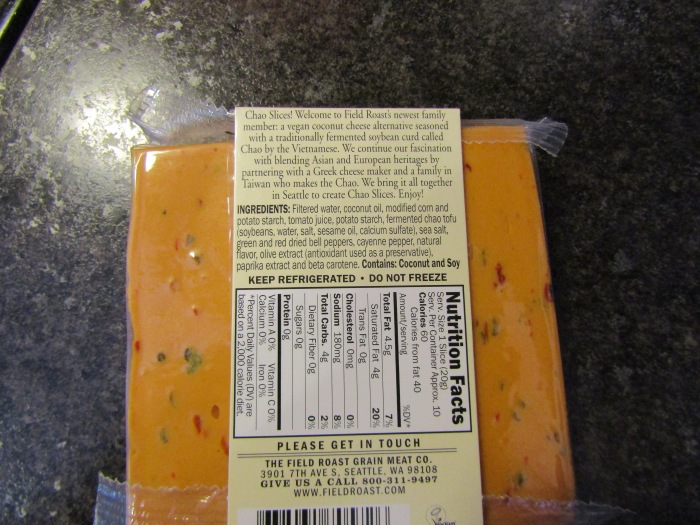